Gear Test: Steel Mugs With and Without Lids 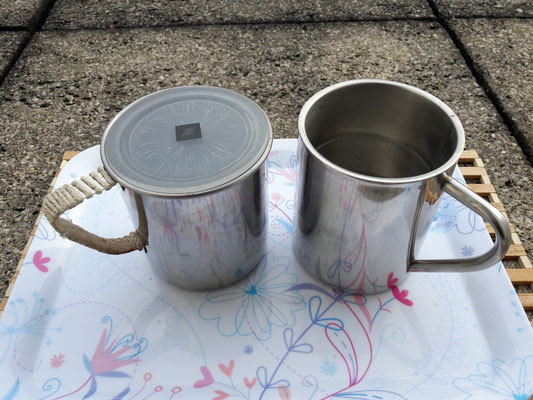 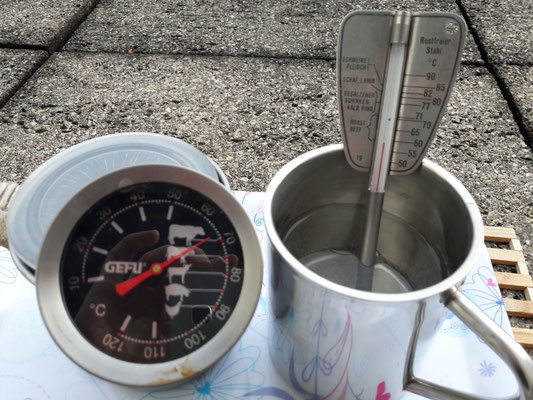 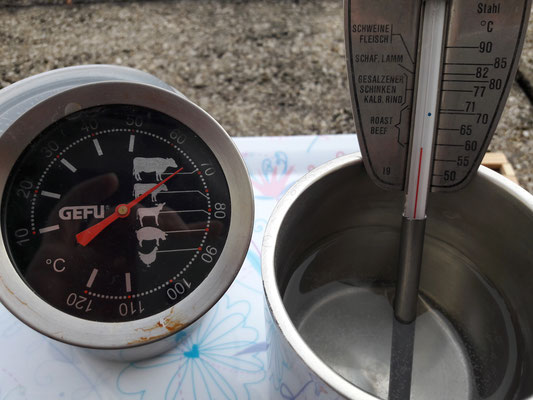 My last Blog article stirred a little bit of a discussion. In the previous set up, I tested two steel cups - one single-wall, the other double-wall - for their heat retaining qualities. I filled both cups with the same quantity of hot water, set them out into the cold (~0°C) and after some minutes measured the temperatur loss. As expected, the water in the double-wall mug was about 10°C warmer.
Someone in the discussion pointed out, that a lid on the cups will help retaining heat. I got curious how much difference a lid would make.

Is the loss of heat through the open top possibly a more significant factor in cooling, than single- or double-wall steel?

Steel is a good conductor of heat. Could a covered single-wall cup at least be on par with a double-wall cup without lid?

I was curious and started a second test. I took the same cups from the previous test. Filled both cups with 300 ml of boiling water. Covered the SINGLE-WALL cup with a lid. Then set both cups on the balcony. Outside temperatur 6° Celsius. After 10 minutes I measured the temperatur of the water. To my surprise, the water in the covered, single-wall cup was at 68°C, while the water in the double-wall mug, without a lid, had cooled to 58°C.

The results had reversed!

Without a lid, the single-wall mug cooled faster. The liquid was an average of 10°C colder than in the double-wall mug.

With a lid, the single-wall mug kept warmer. The liquid was about 10°C warmer than in the double-wall mug.

With a lid a single-wall mug can beat an open top double-wall mug.

Another argument that came up in the discussion: single-wall steel mugs can make for a very painfull experience when sipping very hot beverage. In fact, steel is such a good heat conductor, a metal flask can cause sever burns to your skin, when you fill it with boiling water. Be very carefull. Do not hold a metal flask in your bare hand while pouring boiling water into it.

Boiling water is usually 100°C hot and burns can occure at temperatures as low as 44°C, depending on length of exposure! Temperatures exceeding 80°C can cause sever burns in less than a second!

That's why many people dislike drinking from steel cups. Some got their lips in painful contact with a too hot rim when trying to sip very hot beverage from a steel cup.

I conducted another test. This time I took three cups:

Then I touched the rim of all three cups with my fingers:

All three could savely be touched without burning my fingers.

When I touched the bottom half of the cups though:

The liquid in all three cups was too hot to drink. Initially. When the liquid in the porcelain cup had cooled down enough to be drinkable (the temperatur I usually begin drinking my freshly brewed tea), I found it drinkable in the other two cups too. The double-wall mug wasn't a problem anyway. Its content was slightly warmer. The single-wall mug was an interesting case. The liquid was a few degrees cooler than in the other two, but the bottom half was still very hot. Yet, at the rim the steel was cool enough to touch with fingers and lips and carefully sip the water.

Be very carefull when filling single-wall steel mugs with boiling hot content! Where the hot content touches the metal it will instantly become scalding hot. Give the content time to cool down to a drinkable temperature.

Boiling water is usually 100°C hot and burns can occure at temperatures as low as 44°C, depending on length of exposure! Temperatures exceeding 80°C can cause sever burns in less than a second!